A curious thing. I was ready to dismiss Dune as poorly written garbage, hardly better than Ron Habbard's Battlefield Earth. An interplanetary civilization that relies on cold weapons in combat (one of which being called a kindjal, jeez!); absurd titles, such as the Padishah Emperor; dialogs in which a character would say "Is it not a magnificent thing that I, the Baron Vladimir Harkonnen, do?" — all these sounded so clumsy and false it made me wince. At one point, I decided it wasn't worth wasting my time on it any more. Then I watched the movie, and considered giving the book another try. And now I'm loving it. So strange.

Via twitter, where someone took a screenshot of this lady's feed. The screenshot taker's emphasis was on the word "parasites"; but I just shudder at the logic of this woman. A system with high taxes made immigrants (Peter Theil? what?) rich? Did they become rich because of the high taxes? And then, techie immigrants should somehow be eager to learn (or for their children to learn) the history of race in America? 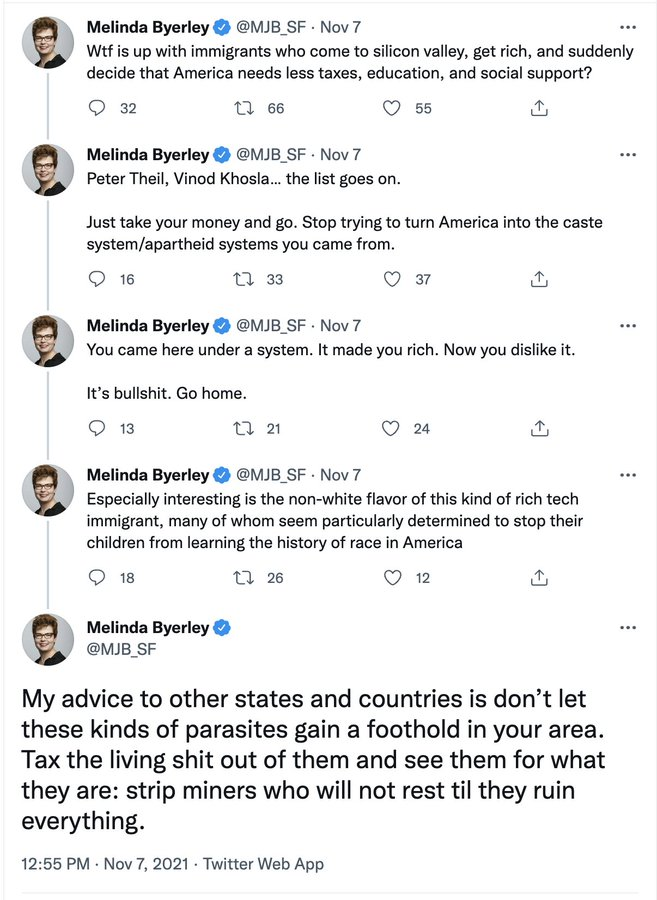 Interesting historical footage: a Russian immigrant who seems to have become a high-ranking engineer at Google introduces an early version of web components (the classical four parts of the spec, of which html imports have since been removed) at Chrome Dev Summit in 2014.

Yang sounds like a real person. He is my kind of progressive: all those bitcoins and shit. Not sanctimonious, not narcissistic, not obviously lying through his teeth, down-to-earth. Sounds better now than when he was part of the democratic establishment. Surprisingly, cusses quite a lot.