What made the biggest impression on me is the first several seconds of that cut, on which a young turks host (is it Ana Kasparian) says, rolling her eyes [1], quote, "It blows my mind that Joe Rogan just yesterday admitted to taking ... ivermectin". If you pause for a second and think about it, what is it exactly that's mind-blowing about that? That he took ivermectin? Well, it's a common alternative medicine, as she well should know. That he admitted to taking it? Well, why wouldn't he? People willingly share about being treated with homeopathy or acupuncture on other occasions. Is it shameful? What's going on through this woman's mind when she arranges her face into a shocked expression while she is saying this?

1) Or what's the more appropriate name for this "I can't even" facial expression?

Twelve thousand people pressed the button. Obviously most of them his followers, but still... interesting: 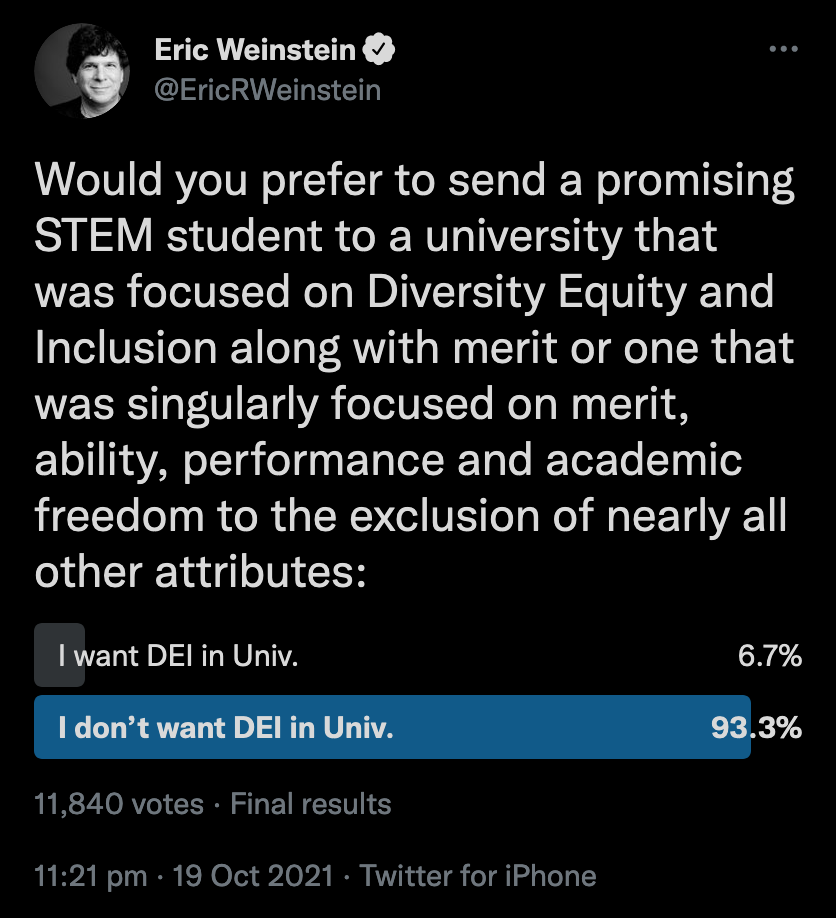 Here's an extract from Uncle Bob's book Clean Agile. Although he has fallen out of grace with the champions of social justice, the sentiment permeating this extract is by no means unique. I saw a similar sentiment expressed by Pinker in his Enlightenment Now. It is so intuitive, it makes sense even in the politically correct year of our lord 2019 when Uncle Bob's book was published. This also is the sentiment that makes the most sense to me. It posits that teams comprised of people who share the same language and broadly the same culture — and, dare I continue, share similar values, especially as pertains to their job — work better together. Which — although I am doubtful that Uncle Bob is conscious of that — is deeply antithetical to the universally worshiped idea of diversity.

In the 1990s, the internet made it feasible to take advantage of vast pools of programming labor in countries where the cost of that labor was very low. The temptation to use this labor was overwhelming. Accountants did the math, and their eyes sparkled with the savings they believed they could achieve.

This dream didn’t work out quite as well as everyone hoped. It turns out that the ability to send megabits of source code around the world is not quite the same as having a team of co-located customers and programmers. The distances in terms of miles, time zones, language, and culture were still huge. Miscommunication was rampant. Quality was severely limited. Rework soared.

In the years since, the technology has improved somewhat. Data throughput rates now allow regular video chat and screen-sharing sessions. Two developers located on opposite sides of the world can now pair on the same code almost as though they were sitting next to each other—almost. Of course, these advances don’t solve the time-zone, language, and culture issues; but electronic face-to-face coding is certainly preferable to emailing source code back and forth.

Can an Agile team work this way? I’ve heard that it is possible. I’ve never seen it done successfully. Perhaps you have.

The improvement in internet bandwidth has also made it much easier for people to work from home. In this case, the language, time zone, and culture aren’t significant issues. What’s more, there is no trans-ocean communications lag. Team meetings can occur almost as if co-located and in sync with everyone’s circadian rhythms.

Don’t get me wrong. When team members work from home, there is still a significant loss of nonverbal communication. Serendipitous conversations are much rarer. No matter how electronically connected the team is, they are still not together in the same space. This puts the people working from home at a distinct disadvantage. There are always conversations and impromptu meetings that they miss. Despite the vast data bandwidth they may enjoy, they are still communicating through a peephole compared to those who are co-located.

A team that is mostly co-located but has a member or two who work from home one or two days per week will likely not notice any significant impediment, especially if they have invested in some good, high-bandwidth remote-communication tools.

On the other hand, a team composed of people who work almost entirely from home will never work as well as a team that is co-located. Don’t get me wrong. In the early ’90s, my partner Jim Newkirk and I successfully managed a team that had no co-location at all. Everyone worked entirely from home. We met in person twice per year at most, and some of us lived in different time zones. On the other hand, we all spoke the same language, shared the same culture, and our time zones were never more than two hours apart. We made it work. We made it work very well. But it would have worked even better if we’d been together in the same room.
Collapse