On the one hand, his analysis of the Freedom Phone is technically interesting and is especially delicious if put next to Candace "I am not greatly technical" Owens's fervent endorsement of the phone on her Instagram (a good reminder of how common folks think and talk, especially the section of them who aren't put off by flags on the home screen and by an app store calling itself Patriapp). 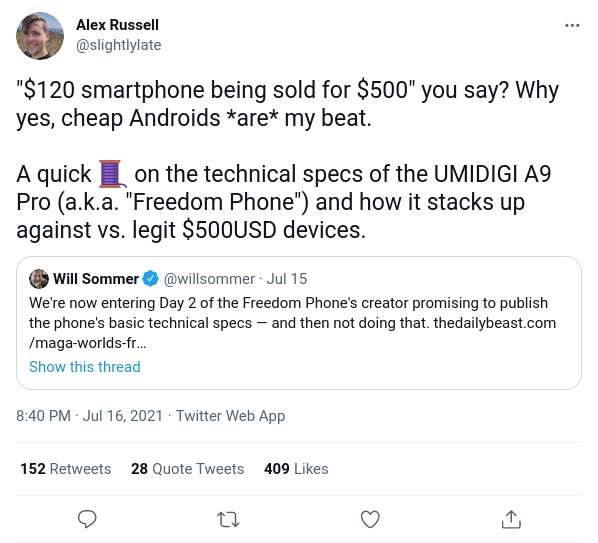 On the other hand, it's depressing to see how much he is invested in the political aspect of this thing, and how he never ever seems to acknowledge the problem that this phone is trying to address. Specifically, that people want to be in control over how they communicate with other people, and don't want companies, such as google or apple, tell them what they can or cannot install on their phones. Their phones, their choice.

Unfortunately, the alternatives to the platforms and products of big tech companies are mostly shit, and not because of the beliefs of the crowd they tend to attract, but because good software requires collaborative effort of smart and expensive developers. But the problem, and the need for having confidence in your tools, is real.
Collapse