I learn that Bret has gone on Tucker from a developer retweeting someone's outrage about this interview: 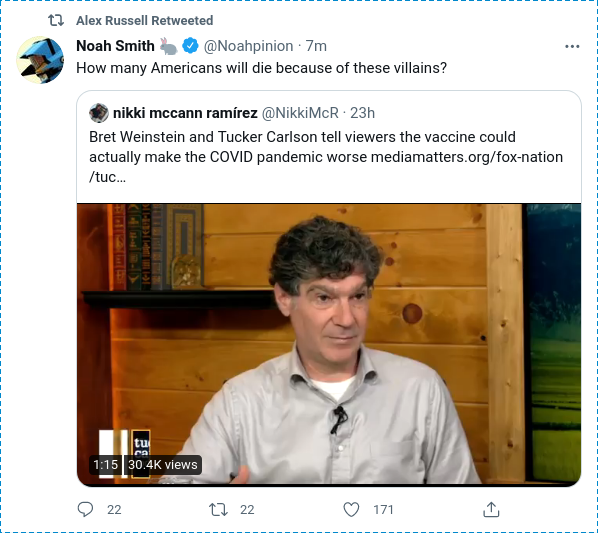 The venomous tweet demonstrates the widespread firm belief that regular people cannot be trusted with an intellectual exercise of hearing a dissenting opinion. That, if Bret is completely delusional, his delusions must be suppressed, rather than exhibited publicly to be demonstrated to be false.

Bret's point, in this particular case, that the commentators find so vile — and again, it's hard to call it his point; he is just repeating and amplifying the point made by one of his guests (was it Geert Vanden Bossche?) — is that a vaccine, by producing immunity against the virus, exerts an evolutionary pressure on the virus to escape this immunity. The more copies of the virus there are in the world (and there are a lot of copies during a pandemic), the higher the chance that some copies will mutate an escape mechanism. It is exactly the same argument that's applied to the mass use of antibiotics with the resulting development of antibiotic-resistant forms of bacteria. I do not know whether it is correct to extend this argument to vaccines and viruses (it probably isn't), but it's consistent with the foundations of biological or medical knowledge available to Bret.

That the majority of the commentators cannot grasp this argument (they don't have to agree with it, but they don't show any signs of understanding it), and that their response is to malign Bret, is depressing: 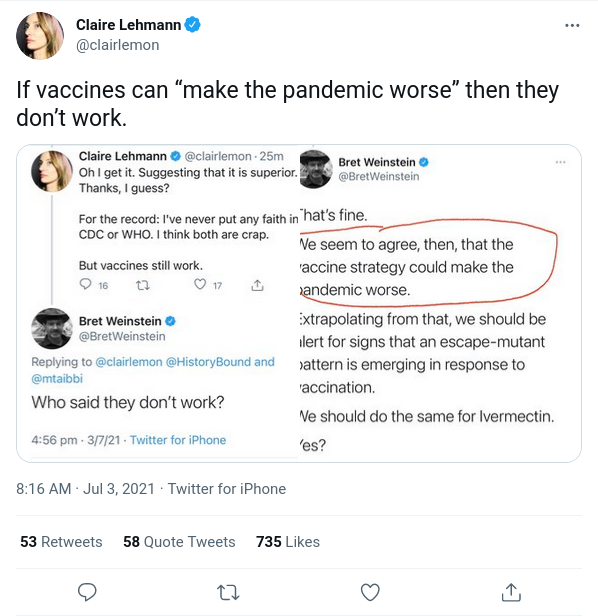 (BTW, I am a bit annoyed by how Fox locks its programs. Compare it with RT, which transmits everything openly. If Fox's goal were propaganda, wouldn't it also broadcast as widely and openly as possible?)
Collapse