I've been watching a recording that someone pointed out on twitter. A professor giving one of his sociology lectures (innovative, as the description for the youtube video says) at Pennsylvania State University back in 2019.

I am watching it, trying to imagine what I would have thought of him had he been one of my professors, and trying to gauge the attitude of his audience.

On the one hand, he is definitely better than the worst lecturers that I have had. The robotic military instructors, the occultish lady for physical education, the moronic political scientist, the incoherent psychologist, and the Russian history teacher who, in full earnestness, quoted the Dulles' plan as a genuine historical document — those were in a league of their own. This guy seems to keep the attention of his audience, and keep them entertained, which is good. Although some of the methods that he employs for that purpose are clearly theatrical — climbing on a table, walking into the auditorium to continue his talk from one of the back seats, miming the graduation ceremony, etc — and the hippy language he uses to interact with his students: "yo", "dude", "bro", "man", fist bump, "fucking" sounds awkwardly out of place.

On the other hand, the amount of actual theoretical knowledge that he squeezes in between all these theatrics is very scant. And some of that factual knowledge is so selective that even I, a layman with no special knowledge, can spot holes in it. For example, in those rare moments when he does show a slide, he shows this: 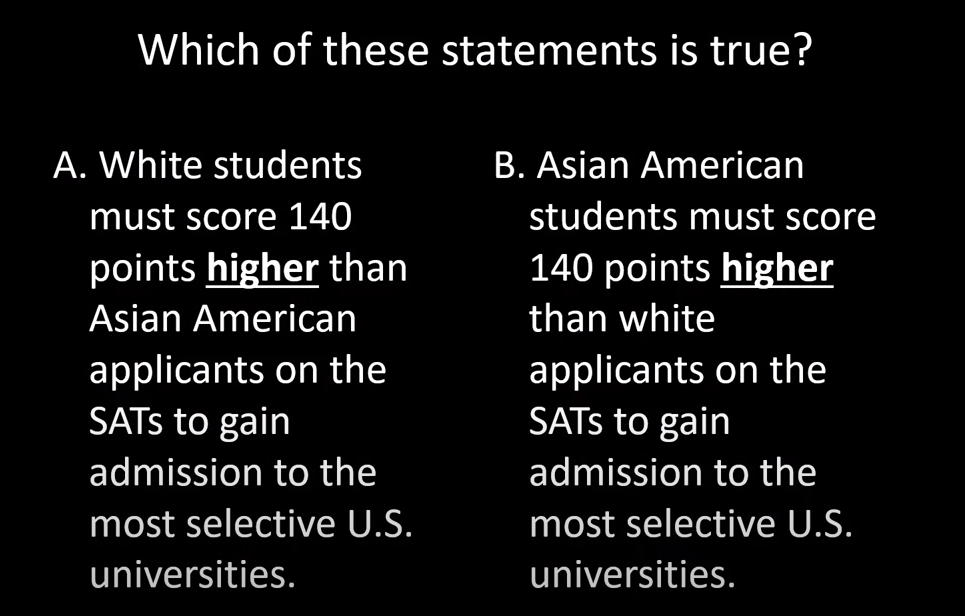 The topic is white privilege. The slide demonstrates that Asian American students admitted to the top American universities have higher SAT scores than white students. The implication is that it's hard to be an Asian and easy to be white. The slide, however, does not include the group of black students, who, reportedly, score even lower than both others. Because it does not serve the narrative of white privilege that the professor is unfolding.

I wonder. I wonder what motivates the students who take his course. Whether it's a genuine interest, or a promise of an easy good grade, or a requirement to get that many hours in the humanities for credit. I compare his lecture with Michael Sandel's intro course on ethics or David Malan's intro course on computer science, which, while also not without theatrics (someone described Malan as a rockstar professor), are incomparably denser in information. Would such course as his be worth paying for? Would I be furious if I took a student loan and had to sit through this?