To me, the most egregious part of the letter below is that, if it is to be believed, Delta Airlines "claims employees represent the company 24/7".

These days, people on social media are easily appalled when a company expects an employee to work outside working hours. Because mental health, work/life balance, and so on. I wonder whether there will ever come a time when the claim on a person's private time and private life outside working hours will be considered equally outrageous. 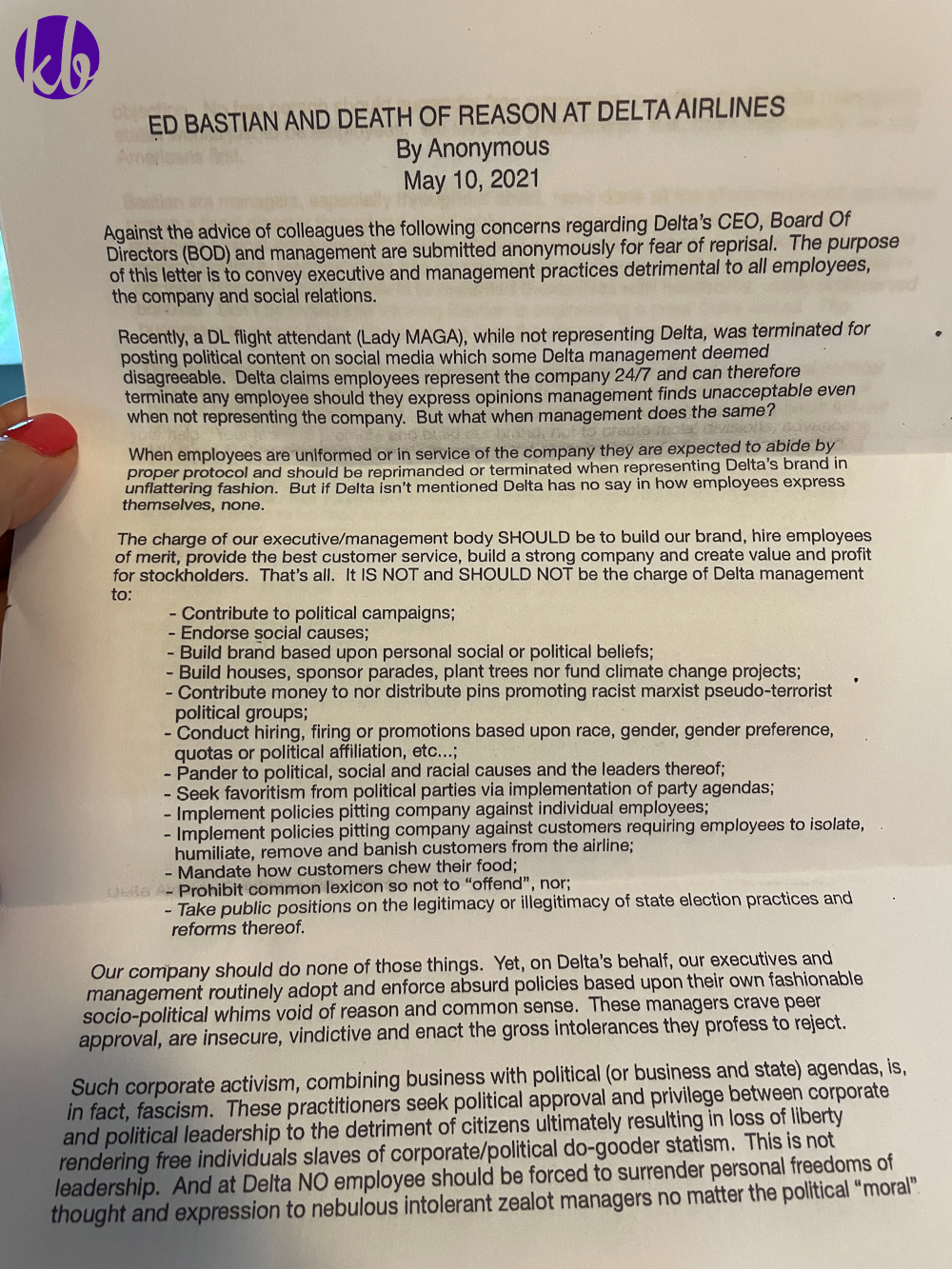 Bret Weinstein talks to one of the principal advocates of ivermectin. He is an interesting personality — so thanks to Bret for having this conversation — but god, it's so annoying when Bret interrupts him to "translate" the medical lingo for who he thinks his audience is. He is doing precisely what puts me off in so many web dev podcasts, when the hosts would invite a knowledgeable guest, strike up a conversation, and then interrupt him mid-sentence to explain "to those who are newer" the meaning of this or that word. Or ask the guest to do it. The guests usually take it stoically. Bret's guest does as well. But it's clearly apparent in the video below (about 16 minutes in) that after the doctor is distracted from recounting his early experience with covid, in which he is just about to explain why he started treating his patients with blood thinners and steroids, he loses his train of thought and doesn't pick it up after Bret's effusive commentary.

Saw a link to a proposal for certain changes to school curricula, by the US Department of Education, published on the Federal Register site.

Firstly, the site is very impressive. Not all of it; the home page is pretty crummy; but the page for an individual document is great.

The proposal suggests two priorities for the American History and Civics programs. Not sure whether they are the only two priorities for the entire programs, or are proposed in addition to some existing ones; but from the text of the document alone, I would guess they are the only two. The first one is predictable; the only part of it that is less frequently repeated is the "linguistic diversity" (does it mean teaching Spanish? or Ebonics? in American History and Civics classes? the proposal doesn't explain).

I've never properly understood what is meant by information literacy.

It is certainly true that there are certain research skills that require learning. Citing sources is one. Tracing the chain of references to the primary source is another. Awareness that a text can change when quoted, or even change from edition to edition in a printed medium; or change surreptitiously at any time in the digital space, is the third. But that's not what this "priority" is about.

Recognition that many (most? all?) texts have some ingrained biases, and that these biases are potentially discoverable is another arguably useful skill, which is closer to what the "priority" suggests.

But, judging by the text of the proposal in general, what it's mostly about is teaching kids how to tell fact from opinion, accurate information from inaccurate, and real news from fake news. I'm curious to see their teaching materials for that.
Collapse