A marginally interesting — in a psychological, or maybe anthropological sense — article written by a lady who did something with marketing, community and events at Webflow, and before that at Github and Atlassian. She wrote the article after she had quit her job at Webflow, and gave it a title "White women are the most dangerous upholders of white supremacy in Silicon Valley, and holding them accountable could cost you your career, your community, and your sanity".

The gist of the article is that she felt slighted, neglected, abused by her female manager. Because the manager was white and female, and they obviously didn't get along, she inferred that it must be the white supremacy channeled through her. What exactly made this dysfunctional relationship between a white subordinate and a white boss into an act of white supremacy on the part of the latter is anyone's guess. The author is obviously an unreliable narrator; but even if one takes her story at face value, one is left to wonder why she does not discover a deeper generalization that people are people, and sometimes people are bad, and power corrupts, and if a woman can be as obnoxious as a man, then maybe a non-white person can be as obnoxious as white.

Also, this paragraph from her article has left quite an impression. Is this... normal?

I spent eight years at the first tech company that employed me. Every single manager — I had at least five — was a salt-of-the-earth type person. People who made sure you got home safely after work. People who took you out for coffee when they noticed a change in your demeanor. People who showed genuine interest in your life. People who mentored you and were excited to see you grow. People who explained how they did things, opened their networks to you, and encouraged you to make mistakes. People who stayed late on Thursdays and held an ice cream club just for you so you could have a reliable time every week to plan your future together. People who knew how to have fun while working hard. People who showed me what a real community does for their own members when you lost a parent and needed to feel safe somewhere. People who still check on you eight years after you leave. 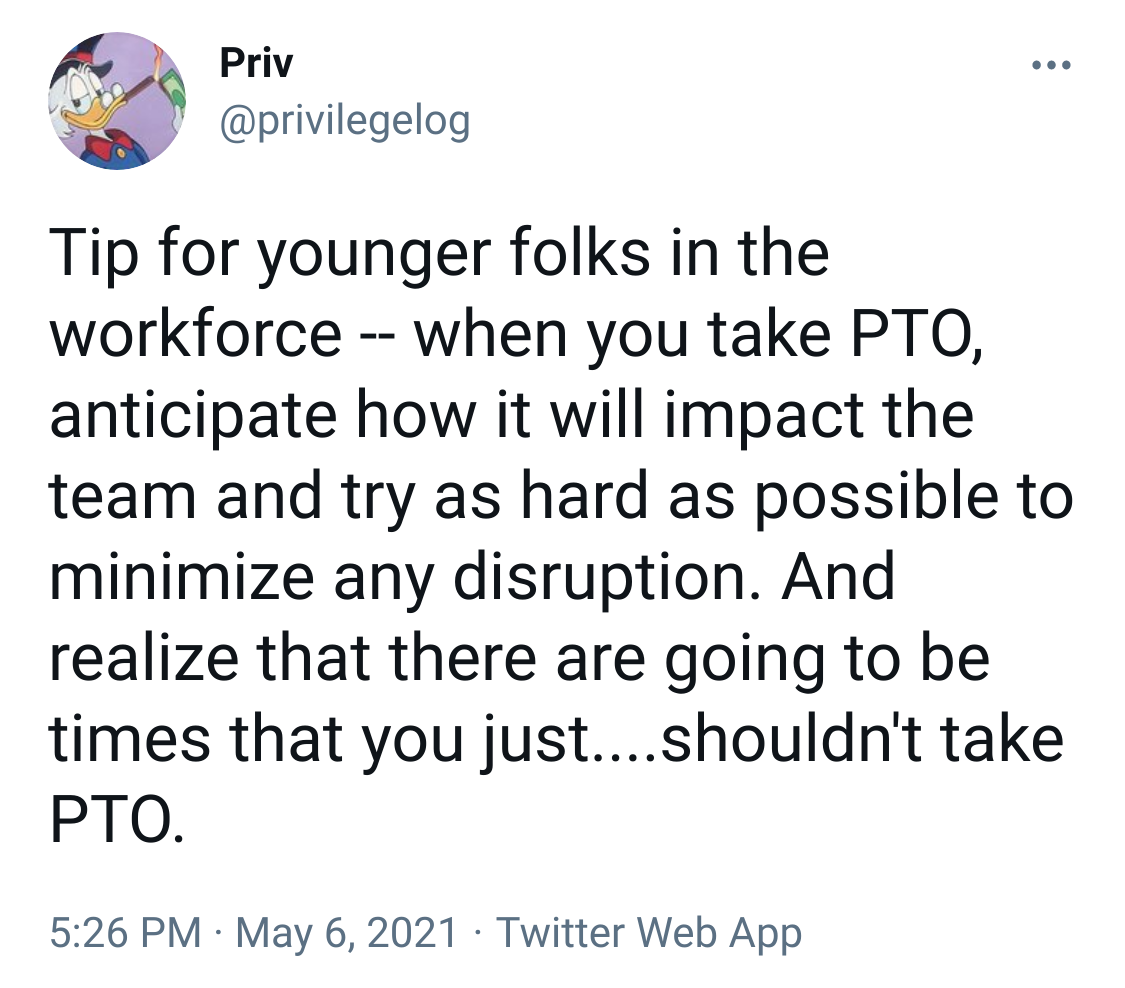 The thread is full of angry comments that suggest that it's the manager's responsibility to coordinate the work and to make sure that a team member's time off does not disrupt the work of the rest of the team. Curiously, I think it's a very anti-agile, anti-scrum approach — the agile movement was for placing the responsibility — as well as more power and freedom — with the developers, and making middle managers mostly redundant.

I don't remember whether I've posted this picture here. A daily reminder of the state of the industry: 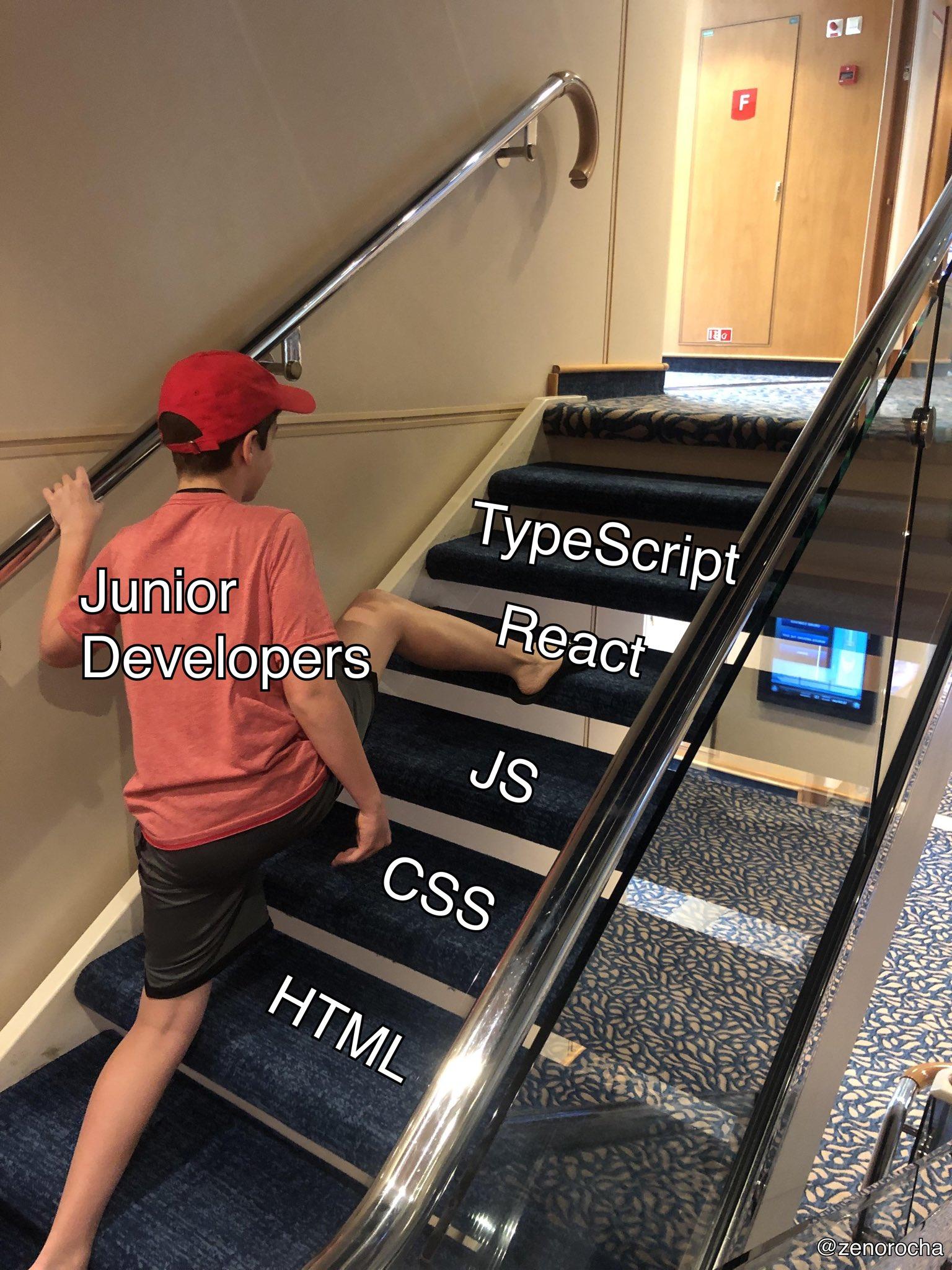 Saw in a developer's feed. 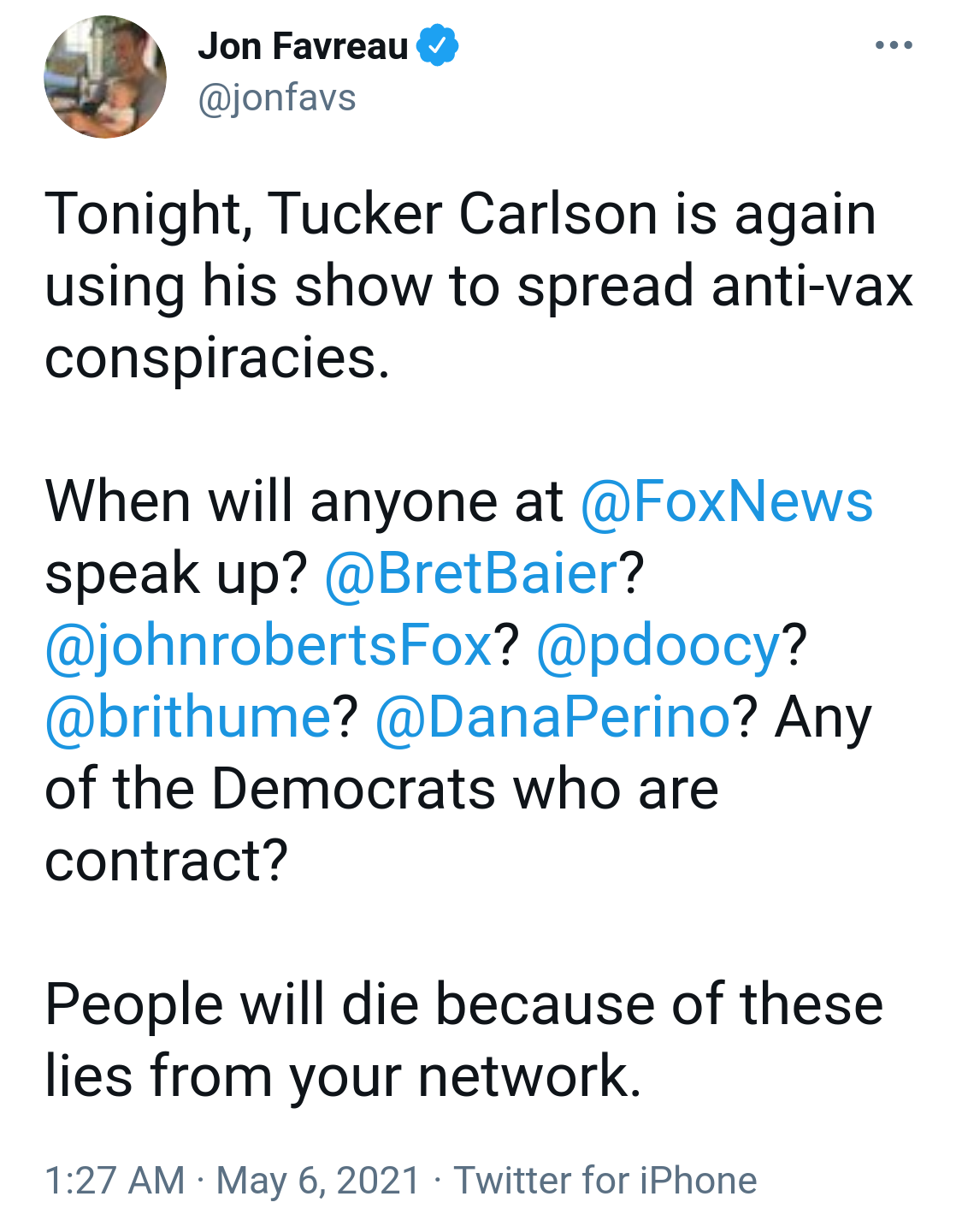 I tried to find what was it exactly that Tucker has said that has upset the twittersphere so. It wasn't easy. Fox, which publishes some of Tucker's clips, doesn't seem to have published the segment they refer to. There is a fair share of clips debunking Tucker, including the one by the CNN, in which Dr Gupta thanks the hosts for not playing Tucker's exact words, so that they don't him a wider platform (imagine how feeble-minded they imagine their audience to be). Finally, today I noticed that someone has posted Tucker's segment on the vaccines. I am not completely sure it's the one that was so upsetting to the people, but I believe it is, because Tucker mentions a system called VAERS in it, which John Oliver then mentioned in his rebuttal:

Don't know how long before this clip gets pulled down due to either Fox's copyright infringement or someone's offended sensibilities. I give it probably a day or so. Again, what is remarkable is the intensity of anger aimed at Tucker, given that his monologue is largely in line with what someone like Bret Weinstein could have said. Which doesn't mean, of course, that he may not be engaging in a post hoc ergo propter hoc kind of fallacy.

By the way, did Kamala really say "If Donald Trump tells us we should take the vaccine, I'm not going to take it"? The hideous political creature, if true.

How is it that the society and the government tolerates the blocking of the roads? Those who object to these practices usually employ a variation of the "won't somebody think of the children" argument (what's its proper name in rhetoric by the way?), which becomes "what if there is an ambulance or a fire engine stuck in the traffic". I find it excessive and disingenuous. You don't need the moral backing of a potential emergency to find this practice appalling. Why should someone's freedom of speech and the right to make a stink infringe on someone else's freedom to get to wherever they are going? That miserable driver, who thinks it's the police's job to keep the traffic going, seems to be in the wrong in this video. How come?

P.S.: When the British parliament tried to pass the law making it more costly for protesters to engage in disruptive behavior, there was a huge public outcry. Says a comedienne at the BBC question time: "The definition of a protest is to be noisy and annoying. And I can't afford to be criminalized; I can't afford to go to jail". Well, yeah, that's the point.
Collapse