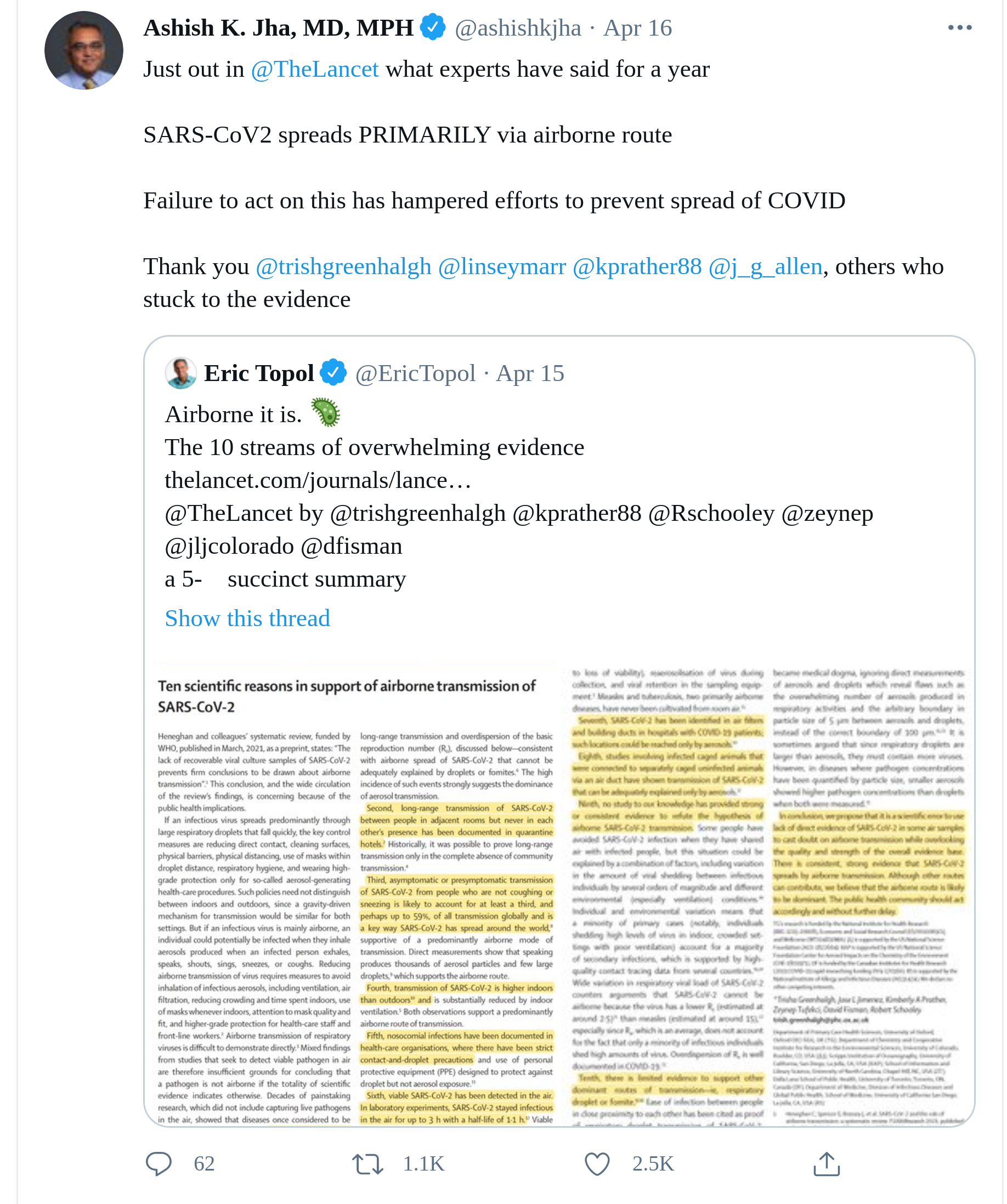 Airborne — as opposed to what? Was any other hypothesis of its transmission ever seriously considered (apart from the strange countries, such as Russia, that enforced the wearing of protective gloves in public places)? How would one act differently had this eye-opening scientific evidence been available a year ago?

On the prevailing ideology in the industry, continued.

Heydon is a designer. And a web developer. He is a fairly recognizable figure in the frontend circles, and is even known to have given the name of lobotomized owl to this CSS selector: * + *. He has later come to regret it because, as he said, it was making fun of mental illnesses, and therefore exclusionary. He has also written this anti-capitalist... erm... art project: https://twitter.com/heydonworks/status/1234421013917700096 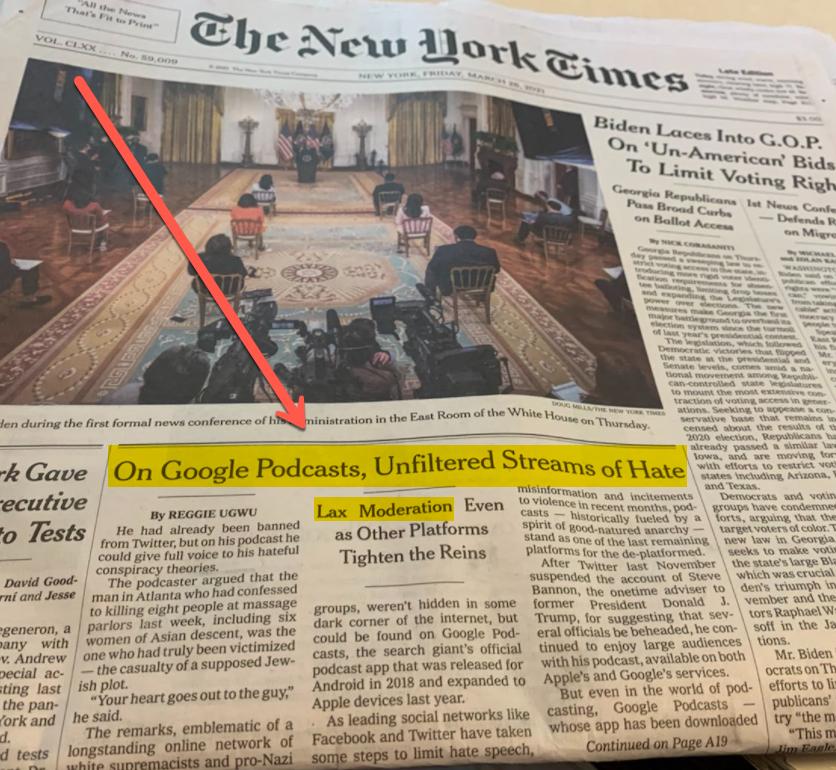 Youtube suggested to me John Oliver's monologue on Tucker Carlson. I found it mostly vengeful and pathetic, and largely pointless, because Oliver's audience already hates Tucker's guts, whereas Tucker's audience would never be convinced by this eclectic assortment of clips, mostly taken out of context, and stitched together with praises by some odious people. Oliver even finds this quote from Tucker reprehensible:

Tucker: But I also think that if things radically change in your country it's ok for you to say, what is this? Maybe I don't want to live in a country that looks nothing like the country I grew up in. Is that bigoted?
Oliver: Yeah. Yeah, it is.

Which reminded me of a thought that I had that the phrase "our democracy" ("a threat to our democracy", etc.) is conservative by its very nature — it assumes prior existence of something valuable (compare to Tucker's "the country I grew up in"), and announces intent of its protection. But of course, because of its positive connotations, it is freely used by both the right and the left.

Wonder when the word necessarily has begun to be widely used in negative sentences in something other than its direct lexical sense, but rather as a marker of something else — either of politeness or of speaker's ostensibly deep thought.

I've been hearing it a lot over the last several years in sentences where it doesn't make any lexical sense. Kinda like literally used figuratively. Seems to be a hedging marker that I don't think has been in wide circulation ten or twenty years ago. Have linguists remarked on it, I wonder?

On the ideology in the industry:

A guest on a podcast: There was a thread on Twitter the other day, with Adam Rackis, and he had made a comment about how if he saw, like, a huge stack of resumes, how do you like syphon out candidates who will be successful in a role, and how do you prioritize them as interviewees — and he made a comment about, like, well, if I saw, you know, a resume with candidate who went to Harvard and graduated with a computer science degree, like, I would prioritize them. And I am like, do you understand, like, the privilege that comes along with that? Because not everyone can go to college at all, let alone Harvard. And just because someone comes from a college degree or an Ivy league school does not mean that they have the skills necessary, or the drive for that matter... (link, at around 3:50)

The twitter exchange that she mentions must be this one: 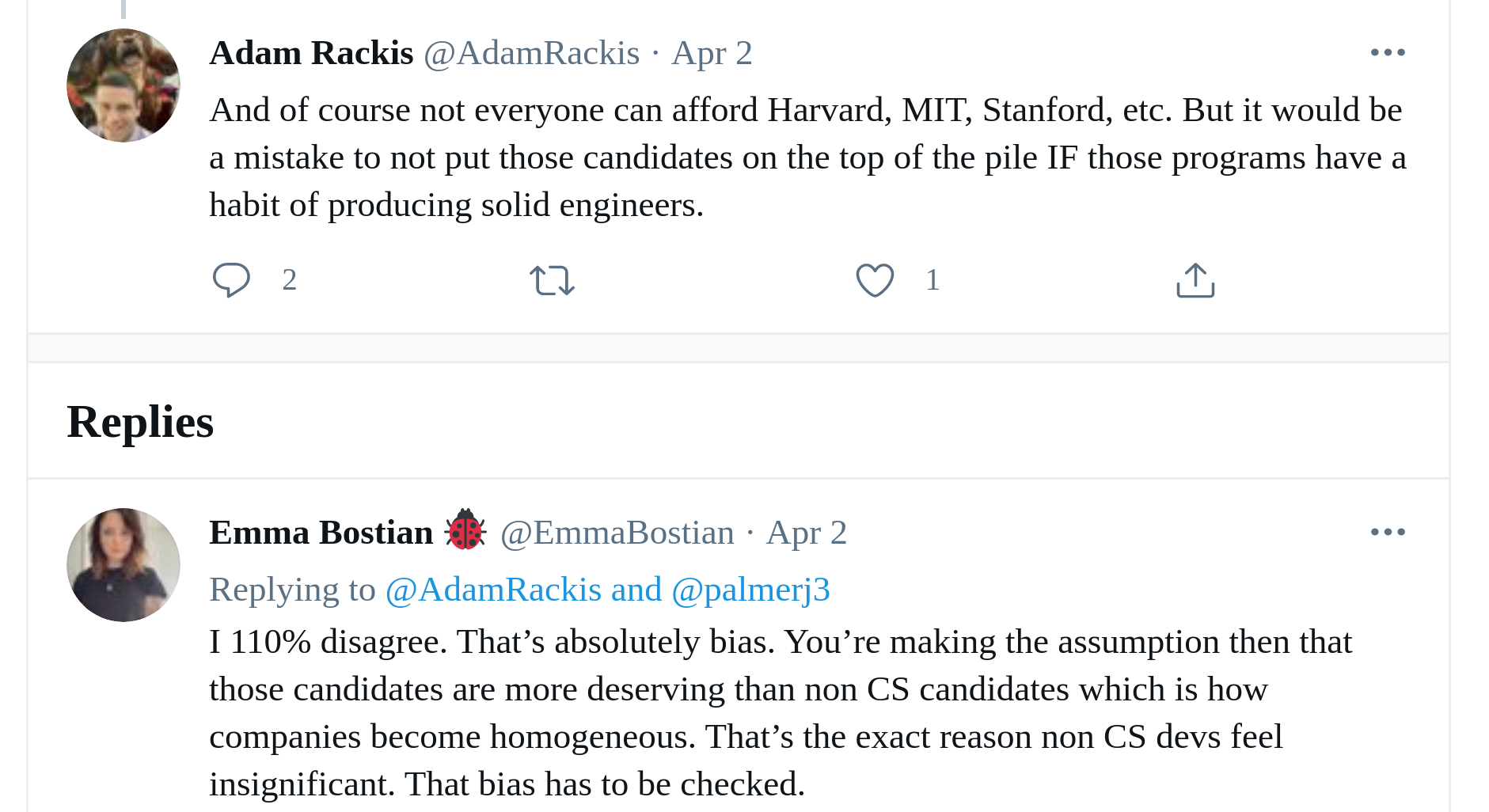 Remember the time when degrees from prestigious schools were supposed to impress people? At least by implying that the person had whatever it took to go past the admissions committee — and then to eventually complete the program? Well, this is called privilege now. Although I don't know whether the effort to downplay the significance of a degree from a brandname school will be sufficient to counteract whatever it is that supposedly makes those schools stand out as a seal of quality.
Collapse