Yes! I fully empathize. I've been cursing Storybook, and myself for going with it, for the several months I was trying to update to webpack 5. And some of the effects are still lingering till this day. The bloody thing has its own dependency on webpack 4. As well as a shitton of other dependencies. And until one gets stuck in this mess he won't fully appreciate how crappy a situation it is. 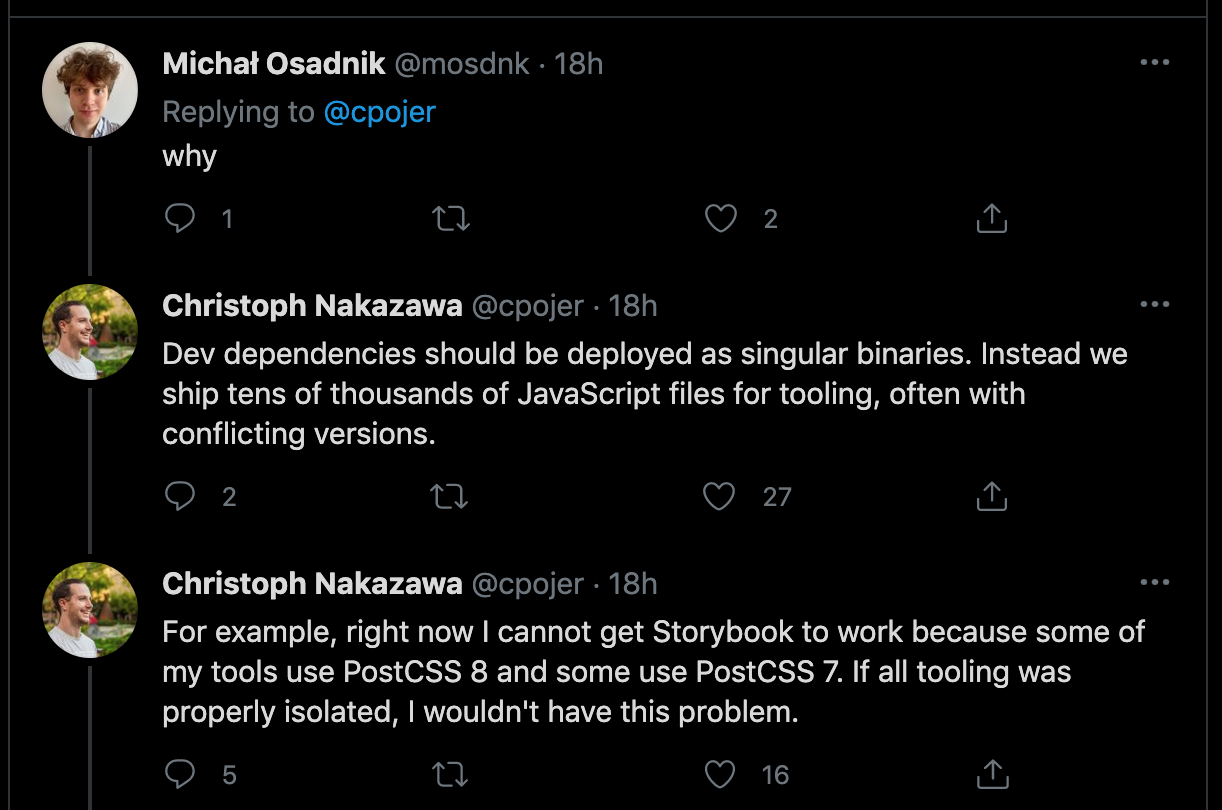 Reminder to future self if he wants to bulk rename a bunch of scss files to .module.scss (because CSS modules), and then update the references to those files in the typescript files importing them — this should work:

(from a note found after googling for the correct sed syntax)

A conversation with Justin Fagnani about his own history and the history of lit-html and lit-element. The sound production quality is awful, and results – due to the time lag, I suppose — in his host speaking over him; plus the host's accent is excessively German; but Justin is charming, and this redeems everything.

Watched some parts of the Floyd trial. Got wondering about the testimony of the expert witness, a pulmonologist:

Prosecution: Have you formed an opinion to a reasonable degree of medical certainty on the cause of Mr. Floyd's death?
Expert: Yes, I have.
Prosecution: Would you please tell the jury what that opinion — or opinions — are?
Expert: Yes. Mr. Floyd died from a low level of oxygen. This caused damage to his brain that we see, and it also caused a PEA arrhythmia that caused his heart to stop.

The defense, when it came to their turn to question the witness, were mostly obfuscating, which was rather painful to watch. Neither the prosecution nor the defense asked questions that would be really interesting epistemically, e.g.:

- could you walk us through your differential diagnosis? were there any other possible causes of death that you considered, but rejected?
- how do you interpret the complaint "I can't breathe" made when Floyd was still on his legs? was it a panic attack? is his difficulty breathing at that point of the same or of a different nature than when he was in the prone position with three police officers on top of him? is this verifiable?
- could any of the drugs in his system have caused an arrhythmia? the defense is trying to sell the jury on the inhibitory effect of fentanyl on respiration; but apart from that, and apart from the weight of police officers on his chest, could there have been any other causes of the hypoxia?

P.S.: was also very surprised that the defense suggested that this incoherent wail contains the phrase "I ate too many drugs". There are more syllables in it than that.
Collapse