From someone's blog post on their manager-level job at Google:

Hiring, Firing and Promoting. The famous Netflix culture doc claims that culture is “who you hire, fire or let go”. I strongly agree with this, reality > theory. The challenge was that, as Google employees, we were subject to all of the Corporate hiring practices. It is practically impossible to fire someone for the basic reason that you don't need this role any more or there is a better person out there or just plain old "you are not doing a great job". This neuters managers and does not lead to great teams, driven by mission, pushing each other to do better. Fast paced products have different needs that change all the time. There are people who are great for a stage of the company and later, do not have the right skills as the company grows. It is not their fault, it is reality. But not being able to replace them with people that do have the right skills means that people are constantly trying to “offload” an employee on a different team rather than fire them - something that is not conducive with fast moving and changing needs. I learned the hard way that if another manager is recommending a great employee to hire, that they are probably trying to get rid of the employee since they cannot fire them.

And this addendum is just foul. Clubhouse is suddenly everywhere. Though why those — I don't know what to call them; they aren't even podcasters anymore — would feel comfortable with limiting their audience only to i-device owners, I have no idea:

But today, listening to the last Unfilter episode, I heard an extract from a Trump defense speech — and I have to confess that it resonated with me much stronger than the extracts from accusatory speeches that Unfilter played a week ago. The defense speech I heard was, in essence, about the consistency in the rules of the game. If you spend over four years talking about how much you would like to punch the president, or assassinate the president, or blow up the white house, or fight, fight, fight and so on (all fair sentiment, which I can understand, although not share), you don't get to get all Pickachu-faced and astonished when Trump does the same. You either reject all rhetoric of this sort and behave like cultured, well-mannered human beings — or you embrace it and see how it plays out. Encouraging this rhetoric on the one side and condemning it on the other is duplicitous.

A bit of JS archeology: RxJS core contributors (Ben and Jay) are discussing with the Angular team from Google whether they should tweak RxJS somehow to support zone.js (an obscure concept/library adopted by Angular that I have never properly researched). I wonder if Angular 2 was even out or this was happening even in the earlier days. The funniest bit is the reverence, close to the end, that both Ben and Igor Minar (Angular) express towards their project leads: Jafar Husein and Misko Hevery.

Jay is no longer on the core team, and Jafar has since moved to Facebook and also fallen off the RxJS world.

P.S.: According to Ben's recollections in one of the podcasts, it was Jafar who convinced Misko to incorporate Rx in the very heart of Angular.

The modern use of the word "democracy" makes my head spin: 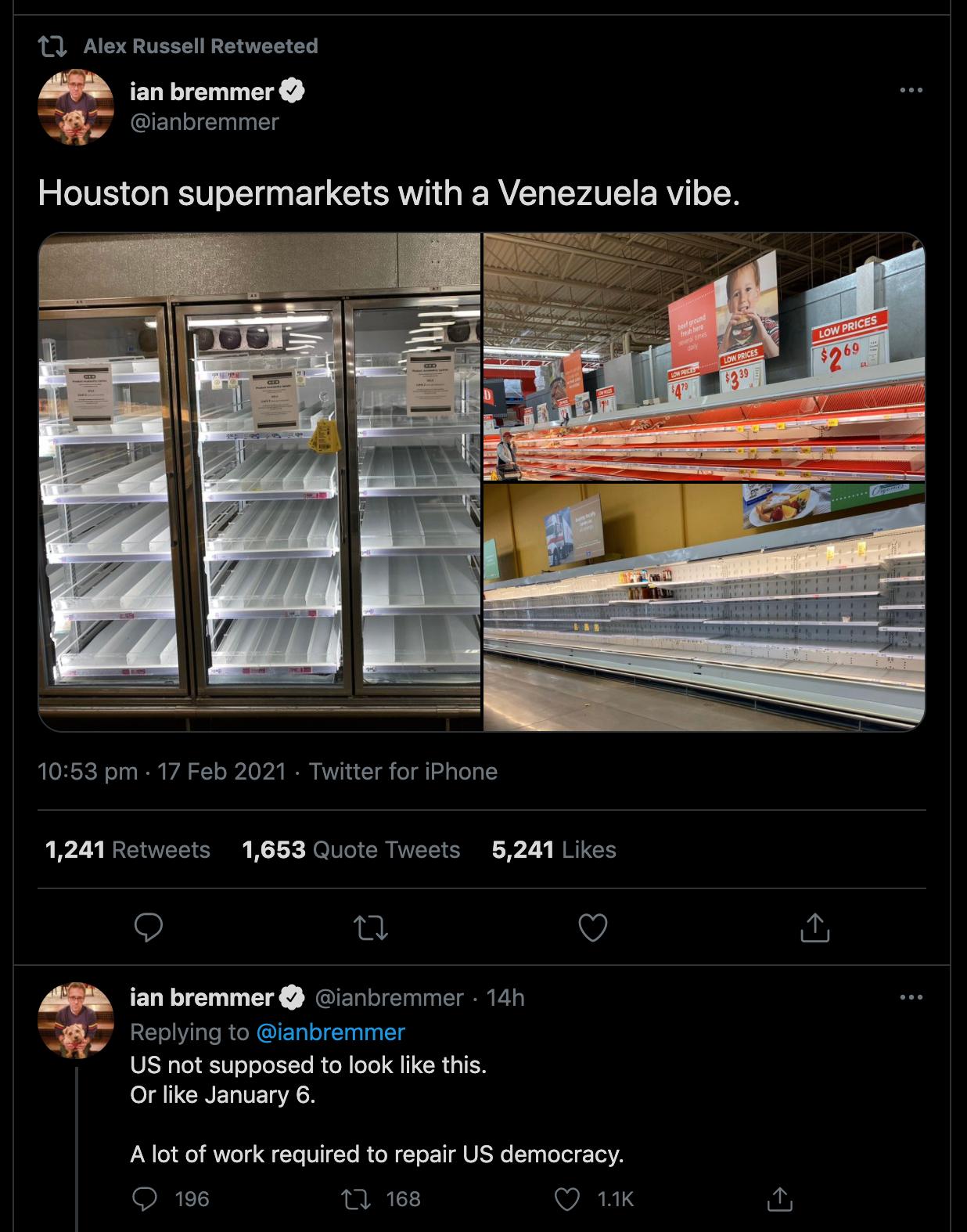 If anyone were to translate/explain what he is saying, how would they explain what is meant by the word "democracy" here?

To repair supply chains in the US?
To repair the way that the US state government functions?

A gif in a developer's github profile:

Surely the following reads as "if you are an author of a polyfill library, do not return promises from it": 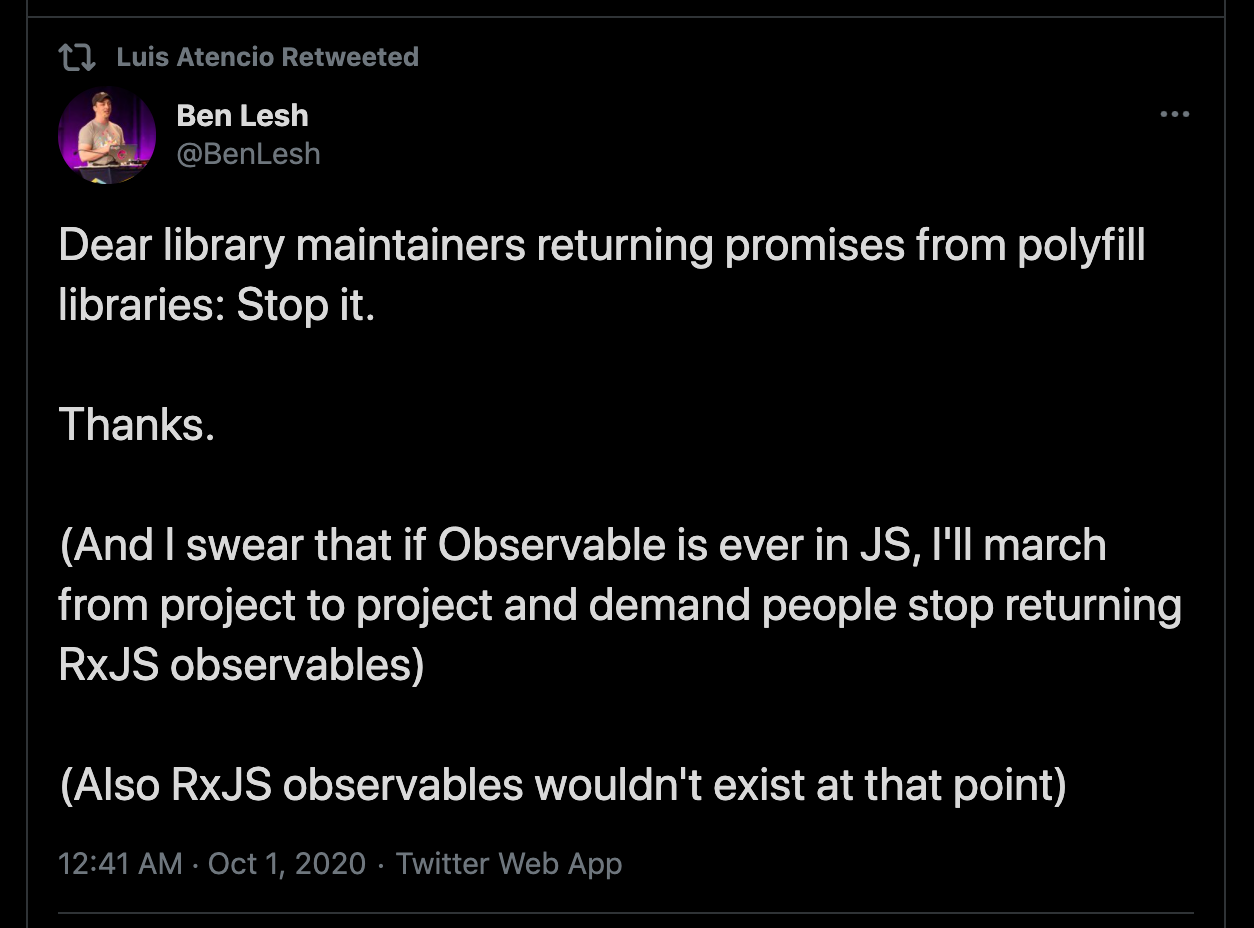 Because the intended meaning is, "if you are a js library author, do not export from your library promises that you import from polyfill libraries". Because there's no need to polyfill promises any longer.

Youtube must have given up on me, because it suggested to me a clip from Tucker yesterday. I understand that Tucker is manipulative (probably on the same level as John Oliver, who habitually curses him). I understand that he appeals to the traditional, conservative values of his audience, which I frequently do not share. But god, does he look an intellectual giant against the backdrop of the talking heads from the opposing camp that he has clipped. He is flattering his audience, sure, but at least he is trying to appeal to their reason. Imagine hearing what he clipped all the time, which is just aggressively dumb.

Hell yeah, a new take on Mortal Kombat! Could be fun.