Pixar's Soul is so good!

Saw this about a week ago, and was appalled by the inanity of the argument: 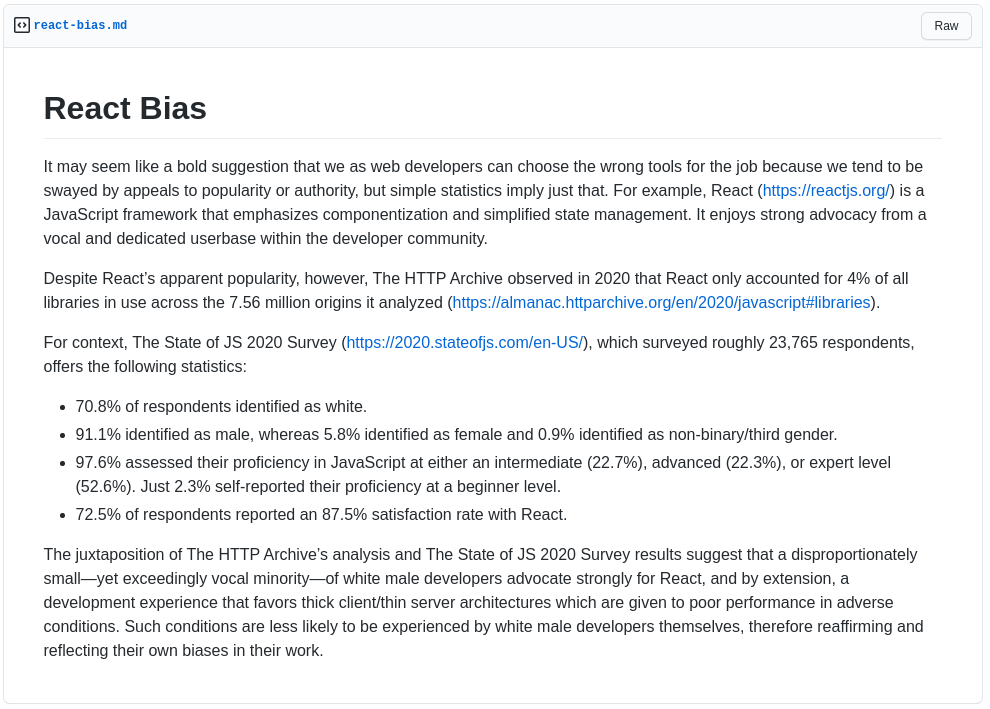 So here's what he is doing. He looks at the results of the StateOfJS survey, specifically at the section called "Frameworks". He sort of ignores that this section, by its very design, focuses specifically on JS frameworks. He also ignores that there are several contenders for the framework with the highest "developer satisfaction" (defined as a person answering yes to the question "would use again"), with what is likely an statistically insignificant difference between them (Vue, React, and Svelte). Hell, we don't even know whether the difference between lower-ranked frameworks and these three is statistically significant. He even ignores that the highest satisfaction rate is reported for Svelte. But then he goes ahead and singles out React.

Then he somehow manages to use these data to point an accusatory finger at white male developers. Given that the author is a white male himself, the readiness with which he singles out this suspect demographic group and his satisfaction with the conclusion must be coming from a specially trained mind. A mind not trained in this way would wonder:

Not that I am especially interested in finding the correlations between developer demographics and their satisfaction with a framework (although my working hypothesis would be that more experienced developers working on the mobile web in regions with slower networks will be more attuned to the problems coming with the bundle size of a framework and with the load it puts on the CPU); but I was curious enough to check the correlation between race+gender and the satisfaction with React. Unfortunately, the data that the survey organizers have put on Kaggle seems to have been stripped of all demographic data; but there is a graphql api for the survey results that allows querying for data with demographic filters applied.

The results for React come as follows:

Looking at this data (and no, I don't understand how "awareness", defined as (total - never heard) / total, can be 0 but other fields can be non-zero either), I would say that, taken in the most naive way possible as raw percentages, white males are the least satisfied bunch of them all. I am too ignorant and lazy to even attempt the most basic statistical tests to see whether there is any statistical significance between the groups; but my point is — look, it's just developers. They are listening to opinion leaders, falling for the hype, and prioritizing their own developer productivity over the user experience. I know I do. If anything, I would expect the white male group to contain a larger proportion of people with a longer experience in the field; simply because they have probably longer dominated the English-speaking market. And with a greater experience, they would be in a better position to have already passed the peak of inflated expectations and to have arrived in the trough of disillusionment.
Collapse