There is a magazine entitled Logic. I am not quite sure what's logical about it; from the look of it, it's mostly collections of humanities-grade essays on topics remotely related to tech. They will be holding a bookclub sort of thing that they are calling Logic School, whose curriculum's (impressive!) description contains the following fun passage:

Rumors, obviously, but it's hilarious, if true, to see Apple go back to a dedicated port for charging and scrap the touchbar. I remember the spin they put on the touchbar when they introduced it several years ago: amazing this, and outstanding that, and look how cool it makes Photoshop or FinalCutPro to work with. The first step in acknowledging that that was a load of baloney was the return of the physical escape key. 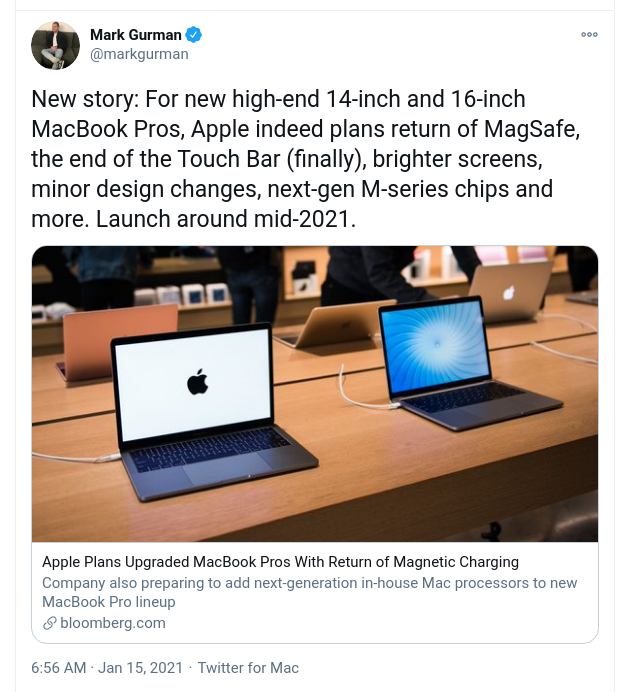 Telegram is running an ad:

Telegram, you will remember, enjoyed complete protection from Amazon when the Russian regulators went after it. I don't remember if it even was removed from the Russian versions of Apple's and Google's app stores. Also, Telegram had an advantage of already being quite popular, including in the circles that put on a performance of hunting it down. Imagine for a second it received similar treatment as Parler did.

P.S.: the banner, by the way, gets shown on the website of RT, aka the mouthpiece of the evil empire that wanted to expunge the valiant little messenger from its territory. The irony.
Collapse