Not at all unique of course; I've been seeing variations of these words repeated over and over; but how come rioting of a disorganised unruly mob is presented, insistently, ad nauseam, as "a coup" or an "attempt to install a dictatorship"?

There were stories, I seem to remember, in the early 2010s, about how wonderful Facebook was for enabling coordination of protesters during the Arab spring. There's even a Facebook revolution page on Wikipedia:

Then the narrative changed. 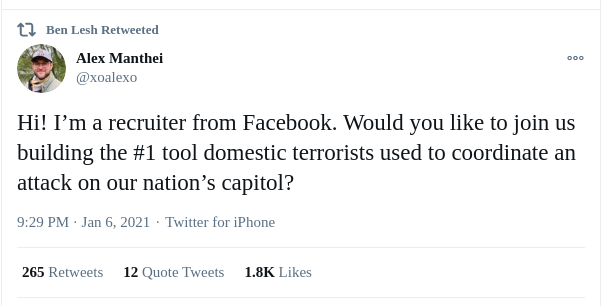 Nice find (no idea who the woman is):

Especially amusing is the nor revolutionaries but traitors bit. Can't remember in which exact book I first encountered the idea how history is written by the victors, but it was some sci-fi novel, in which a minor villain was explaining to the appalled protagonist that the pair of historically vilified traitors who had led an unsuccessful insurrection (on the Moon, was it? or on Mars?) would have been celebrated as heroes had their coup attempt been successful (or was it the other way around? that a pair of worshipped heroes would have been denounced as vile traitors had their attempt failed? can't remember now). That was a novel and cynical idea for the little me, and has left, as is easy to see, a lasting impression.
Collapse