Here’s a good example of what annoys the hell out of me in Bret Weinstein and Heather Heying’s podcast, from an episode in which they talk about masks again:

"I have to take a dig at the New York Times", Heather says, "because I cannot believe them".

She then references a short notice in The New York Times about some evidence that masks may be protective not only to those who are around the wearer, but also to the wearer himself, and starts making fun of the journalists. The point of the ridicule is that it should have been obvious from the start that masks are protective, and writing about it now, especially with the modality of possibility rather than certainty, only emphasizes how incompetent those journalists are.

"You will remember, I went off on a tirade last night when I saw this", she says. "I can not believe the level of scientific illiteracy and, frankly, journalistic fraud in this".

She then continues that the surgeon general and the WHO initially advised against wearing masks, and how it was "a political move". Even when they changed their advice, she says, "they insisted that you only wear a mask to protect others from you, not you from others, as if masks are unidirectional" ... "The idea that we needed unnamed people in lab coats to tell us that mask might actually both protect you from others and others from you, and that this is not even accepted enough that we are being told, 'some experts say it'... my fucking god! this makes me so mad".

To which I can only say, Christ woman!

If only they cared enough to research medical textbooks to check what the received wisdom on masks used to be in the medical community, they would have seen that — long before all that madness with covid, when there had yet been no politics in the issue — the recurring message from various authoritative sources was that masks do not offer sufficient protection to the wearers against respiratory infections, and are intended, first and foremost, to protect patients from the potentially infectious doctors.

Here's a CDC article from 1990, for example, emphasizing that surgical masks won't protect the wearer from tuberculosis:

Standard surgical masks may not be effective in preventing inhalation of droplet nuclei, because some are not designed to provide a tight face seal and to filter out particulates in the droplet nucleus size range (1-5 microns).

And that's tuberculosis, mind you, caused by mycobacteria, which are much larger than viral particles (granted, it's possible that some viruses may need larger saliva droplets to be carried through the air).

A book Reusability of Facemasks During an Influenza Pandemic, from 2006, says:

A report by the Institute of Medicine of the National Academies, from 2008, says:

So when Fauci in April/May said that there is no need for general public to wear masks, he might of course have been a sleazy scheming scumbag wittingly lying to the public to ensure the availability of supplies to medical workers; but he also was saying what used to be the orthodoxy in the medical community. As did the WHO. As do those NYT authors who point out that new evidence might be available that indicates that masks are protective to the wearers as well. And yes, we do need "unnamed people in lab coats to tell us this", because until very recently authoritative guidelines were saying otherwise.

Not knowing this history makes not NYT authors, but Bret and Heather "scientifically illiterate". Their confidence that they can theorize or even common-sense their way into the actual physics of the spread of airborne viral particles is not just embarrassing — it’s arrogant to the point of being offensive. It's anti-scientific. They try to come across as super-smart professors who possess certain academic tools (such as evolutionary theory) that allow deep insight into the nature of things; but what they are is two people with basic biological education and good common sense, who prefer to spend time on political debates rather than on researching actual medical, epidemiological, or molecular genetic literature.

P.S.: The science on masks may have changed over the last decade. I've been shown a link to a report that claims that surgical masks are as effective as N95 masks in protecting against influenza and other respiratory infections. This may very well be the case. However, it does not negate the fact that until recently the authoritative advise used to be as quoted above. My point is that the accusation of the NYT authors of "scientific illiteracy and journalistic fraud" shows glaring ignorance on the part of the critic.

Saw this cartoon reposted by the New Yorker. As the credits say, it's from LA Times, 2014. 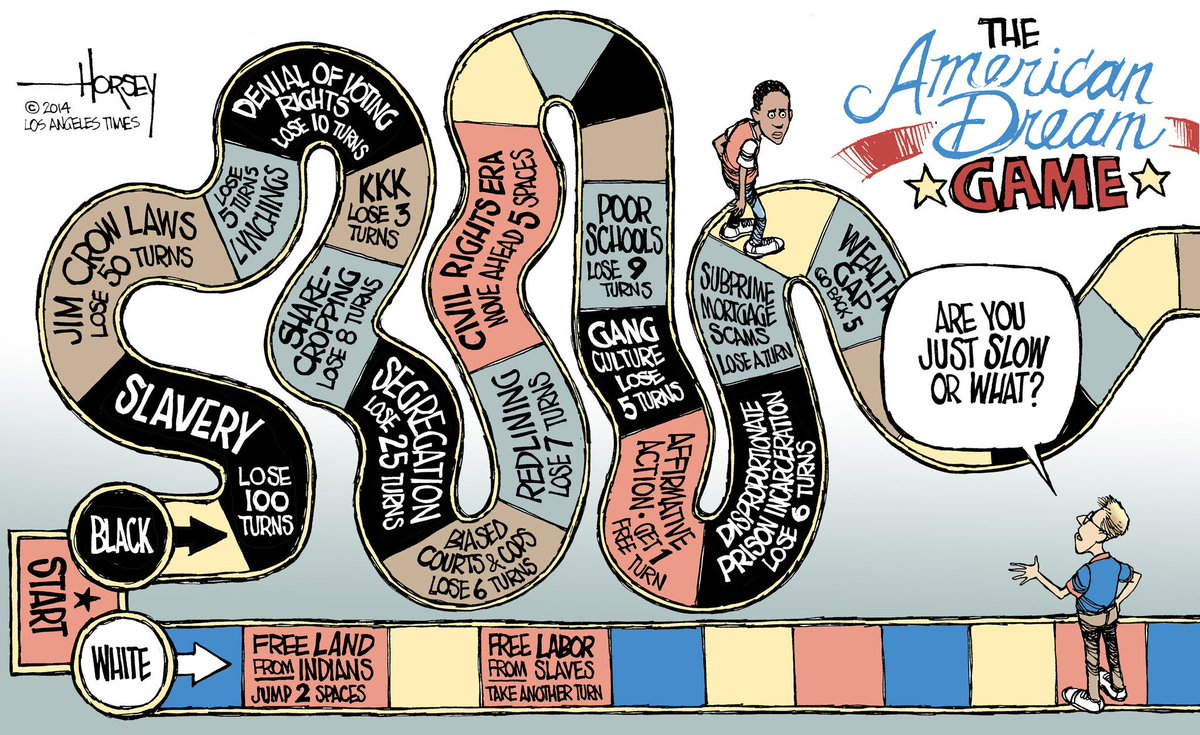 Don't know what the cultural landscape looked like in 2014, but today the cartoon grossly misrepresents the argument. It's not the ill-informed white guy wondering what takes the black guy so long; it's the white guy being shouted at from all corners for taking the bottom lane. How dare he take the bottom lane while some are struggling along the top lane!
Collapse