I think my first observation of an incident that would follow the pattern later to be called "cancel culture" happened in late 2013 — early 2014, after a minor Russian halfwit celebrity, Ivan Okhlobystin, colorfully expressed his hatred of gays. Okhlobystin was creative director at Evroset, a mobile phone retailer, and there were loud demands that Evroset give him the boot. At first, Evroset tried to play the "everyone has a right to their opinion" card, but they soon caved in. I remember my incredulity about the situation, because I held a strong conviction that one’s personal opinions, if they do not interfere with the person’s ability to do their job, should not be grounds for that person’s dismissal. I still hold this opinion, but at least I have gotten used to this pattern by now.

I’ve mentioned here the @js_tut Twitter personality, a Russian immigrant in the US who seems to be making money on javascript courses and who has run afoul of the woke tech community because of his disrespectful remarks about BLM and Nigerians (and perhaps something else).

So he lay low for a while; and then he resurfaced, with pristine Twitter feed and just several dozens of Twitter followers (I didn't capture how many followers he used to have, but it was surprisingly many — surprisingly for the shallow kind of content he was posting): 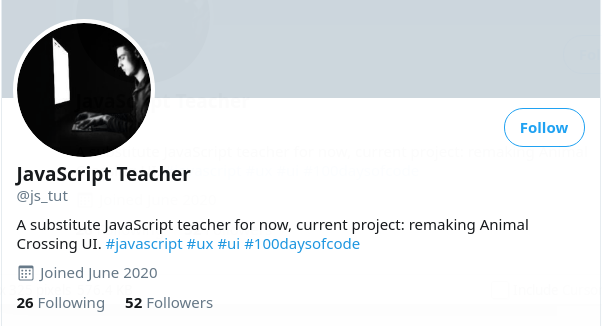 But it is the second tweet in his newborn feed that cracked me up:

Can’t be sure what he meant exactly, but probably that he’ll have to build his Twitter presence from scratch again.
Collapse