Saw this. Tweeted by a person associated with tech (not sure whether a developer herself or just an administrator). Retweeted by a tech person. 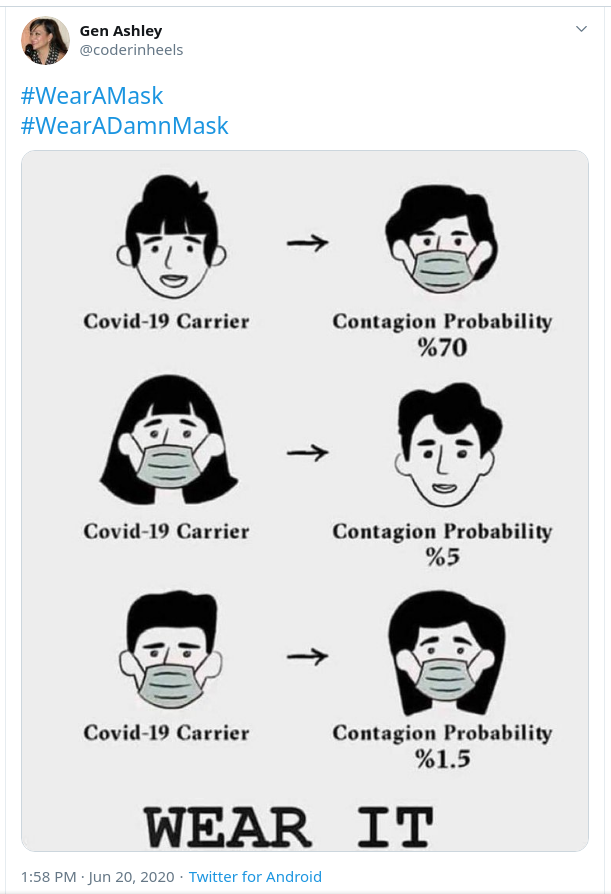 Next thought: is it a correct assumption? What is the source that claims all those numbers? How would one design a study to find these probabilities out?

A quick googling shows that there is no source. The authorship of this little artwork is unknown, and Reuters, when it attempted to fact-check the claim, could not find any source for this data either. Also, this little infographic is as old as at least mid-April, when both the WHO, and the CDC were not especially keen on masks.

So, the numbers are pretty much meaningless. The overall message — masks might offer a certain degree of protection, and if it's not an N95 mask, then it's more effective on an infected person as a means to retain saliva droplets with viral particles — is conventional wisdom. It must also be padded with various caveats about how a mask should be worn to be effective, which is generally ignored. But I am irked that the practice of software development, which involves a lot of debugging, critical thinking about the code, and questioning of texts one finds on the Internet does not train people to question their sources.
Collapse