I once heard in a youtube interview a passing remark about how Churchill reused rhetorical techniques from his older speeches in his famous ones. It took me some time later, when I vaguely remembered that remark, to find the example that was alluded to, but finally I got it. Here it is, as quoted from the book Never Again: Britain 1945-1951:

The Cambridge historian, Ronald Hyam, told us a great deal about Churchill when he traced the genesis of his most famous wartime speech in praise of the pilots of RAF Fighter Command then the Battle of Britain was at its height.

Take the origins of perhaps Churchill's most famous phrase delivered on 20 August 1940 that "Never again in the field of human conflict was so much owed by so many to so few". This has been perfected over several trial runs:

- Never before were there so many people in England, and never before have they had so much to eat (1899, during Oldham by-election)
- I do not think it is very encouraging that we should have spent so much money upon the settlement of so few (April 1906, on land settlement in South Africa)
- Never before in Colonial experience has a Council been granted where the number of settlers is so few (November 1907, on the Legislative Council for Kenya)
- ...nowhere else in the world could so enormous a mass of water be held up by so little masonry (1908, on a dam at Ripon Falls across the Victoria Nile)
- Never before has so little been asked and never before have so many people asked for it (1910, on Irish demands for Home Rule)

The one about the dam is especially cute.

This one made me laugh: 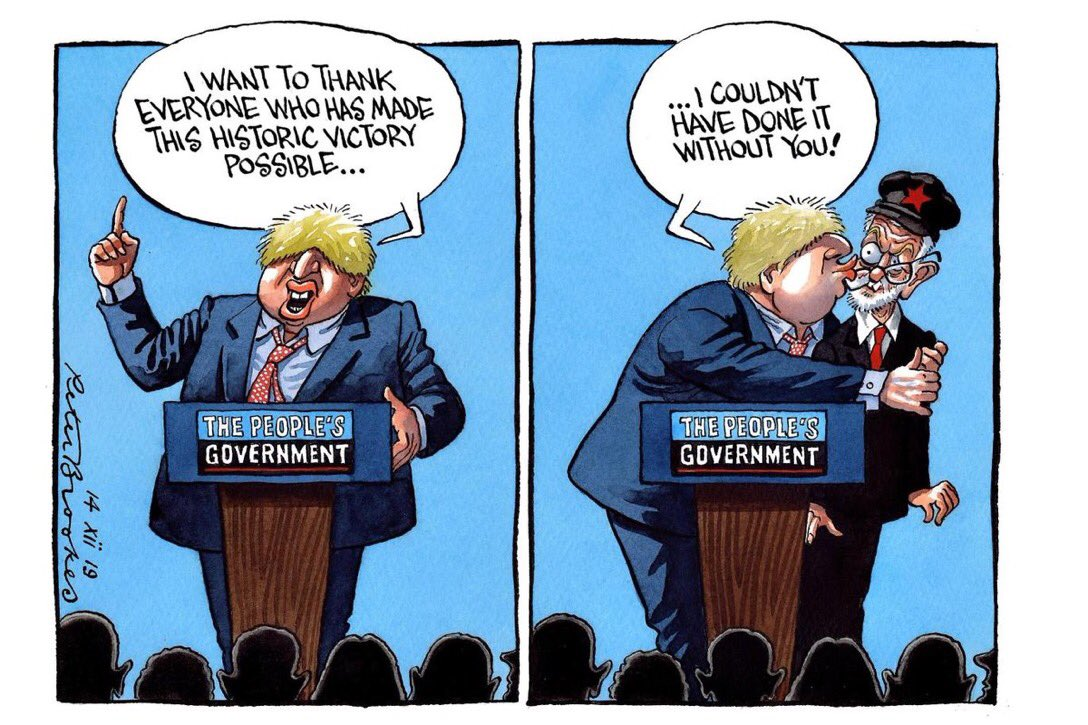 This is from The Guardian, and I think has a cruder style than cartoons from The Times or The Spectator. The creature holding Johnson (is it the monkey from the Lion King, or is it a mad professor figure?) is Dominic Cummings. The warthog, as indicated by the hair, must be Trump. It took me a while to figure out the hyena, but then suddenly, from the high cheekbones, asiatic eye slant, and roguish snarl — is it Putin? 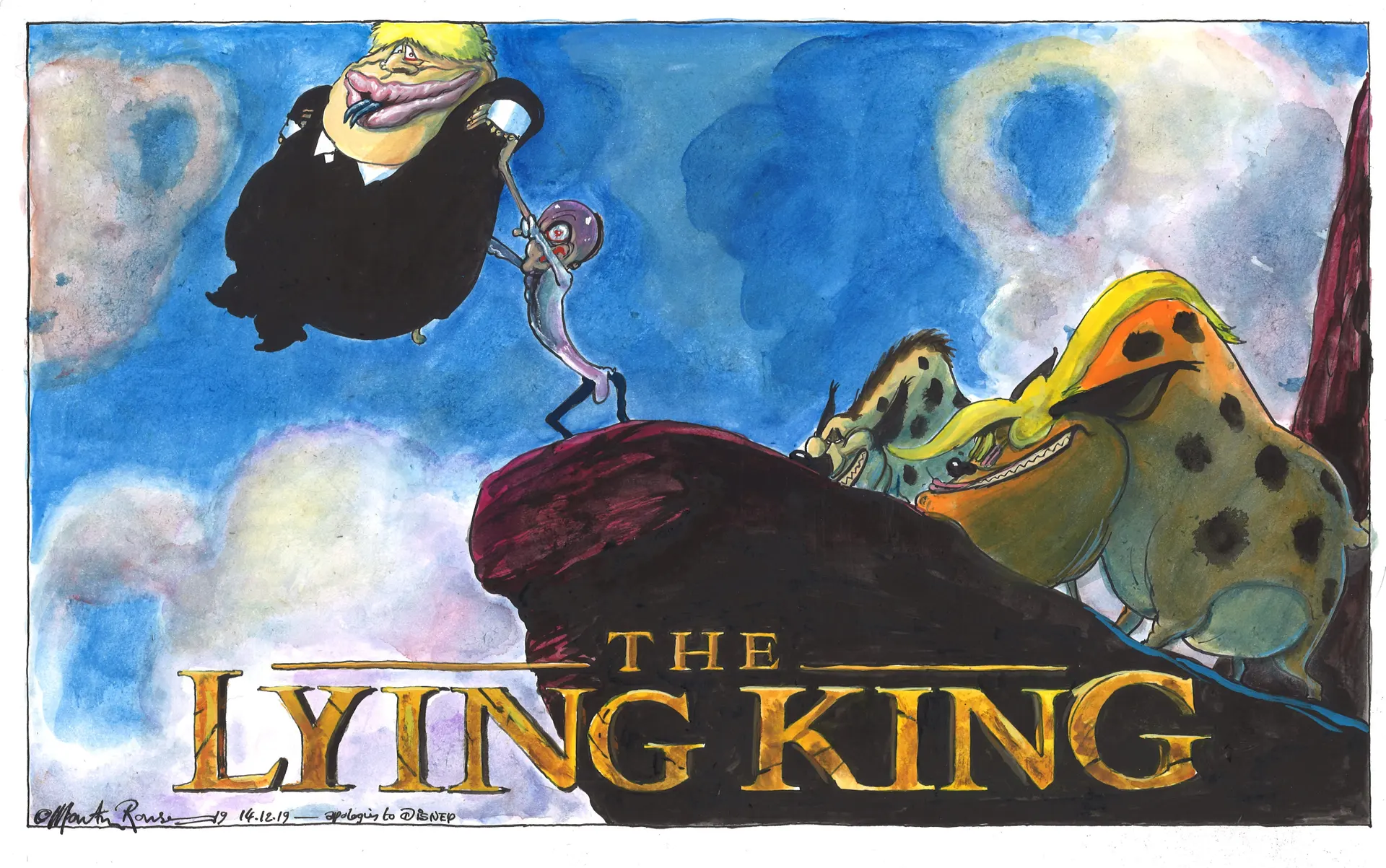 This one (by Peter Brookes) I didn't quite get at first, although I heard about the story with the kid. The figure on the ground looks, confusingly, like a cardinal, and about of Johnson's size, too. It was only when I googled for the original photo of the child that I saw the resemblance and came to appreciate the cartoon (the phone with the photo, falling from Johnson's pocket, is an additional beautiful touch). So the cartoonist expects his audience to have seen the photo then. 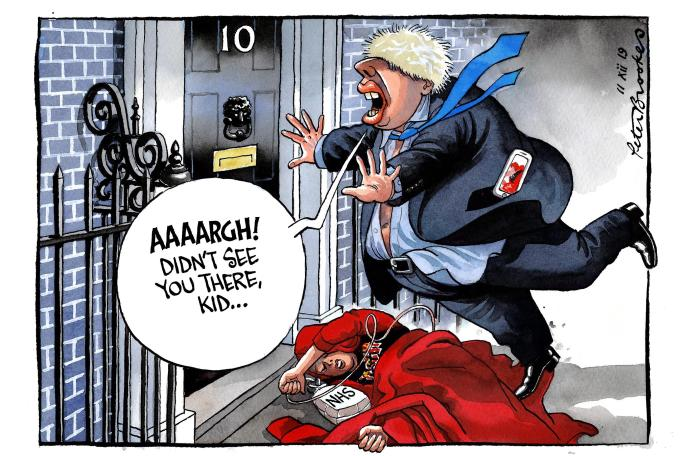 This one (by Morten Morland) also took me some time to understand, although the explanation is literally written in the top-left corner. The play is upon the phrase "the red wall" referring to the host of traditionally Labour ("red") constituencies, which, during this election, went over to conservatives. 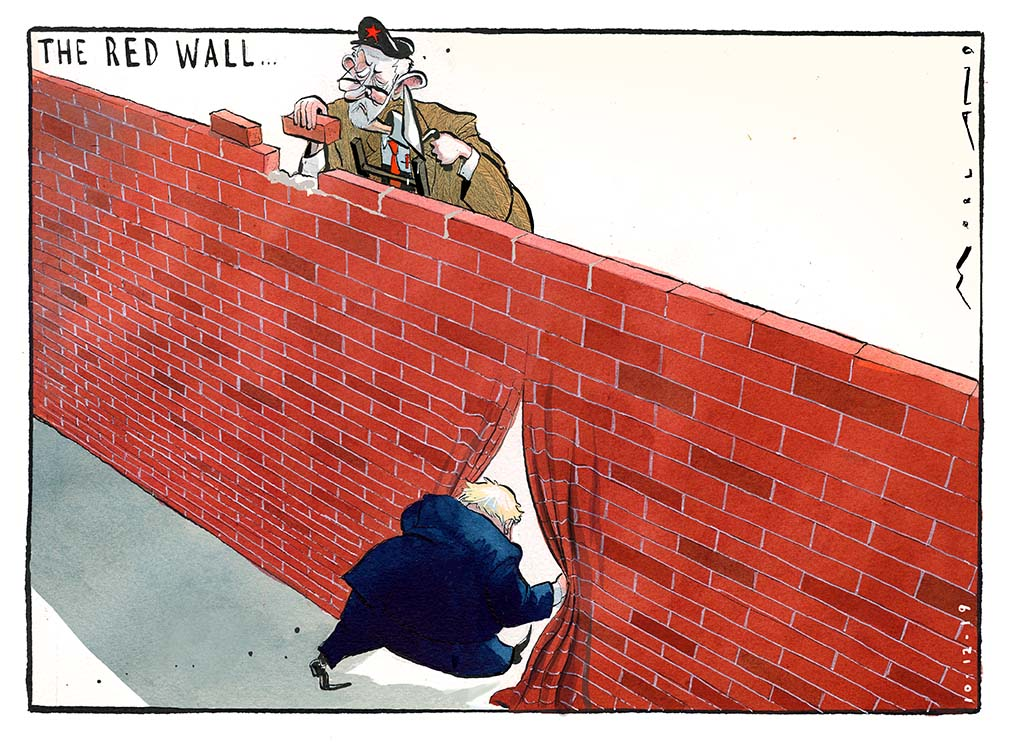 Two details from the cartoon in the Economist that I missed last time:

- the long nose of Johnson's snowman (lies too much)
- (possibly) the spiky crown on Johnson’s head — reference to the Statue of Liberty — e.g. to the US and the Trump connection?
Collapse