I remember a comment I saw on Reddit soon after Dave Rubin announced the publication of his "Don’t burn this book". "To assume your book would be burnable," wrote a redditor, "that’s a level of narcissism that’s almost comical."

That comment offered the word I was looking for when watching Rubin. Narcissism. There are small signs of it, now and then; when he would give a running commentary to his own words or actions during an interview, drawing attention to himself. There’s been more of that on his channel, with titles like "Dave Rubin’s priceless reaction to...", or "Why the hell is Dave wearing glasses" (who cares?). I don’t think I’ve seen this with Joe Rogan, for example. 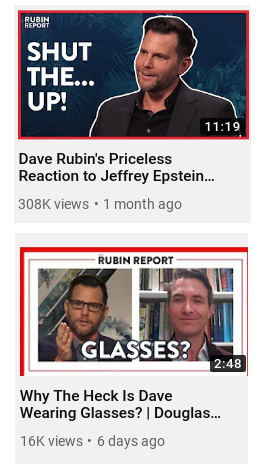 It’s not as severe and off-putting as with Trump, but it is there.

I got reminded of that by an unrelated wtf moment when I watched his conversation with Douglas Murray (who seems to be everywhere lately). In it, Rubin used the word heteronormative at least twice, both times applied to homosexuals and, apparently, in the sense of "other than normal" (as with the hetero- in the word heterodox), rather than promoting normalcy of heterosexuality (first at about 14:25, second at about 18:55).