Apparently, there’s been another twitterstorm over the past several days. I missed it entirely, and only learned about it from a reddit thread reporting that Dan Abramov has deactivated his Twitter account (he has since said that it’s temporary).

The insanity of this particular storm is how it began (according to the reddit thread and someone’s brief chronicle on dev.to).

The eye of the storm, reportedly, focused on the guy called Ken Wheeler. Through reasons beyond me (I never saw anything interesting in the episodic tweets from him) he has gradually amassed a sizable Twitter audience and became a sort of a household name. He is a bit of a joker, and a bit of a douche, but whatever, right? Some people find him funny. Turns out, someone remembered how he sneaked the "game of circle" (which, when explained, is some kind of imbecilic, physical, childish game) in his previous (!) year’s presentation at React Rally. Through the mysterious ways of social media, the gesture used in the "game of circle" has somehow become associated with white supremacy. This has caused a squall of Twitter attacks against Wheeler. 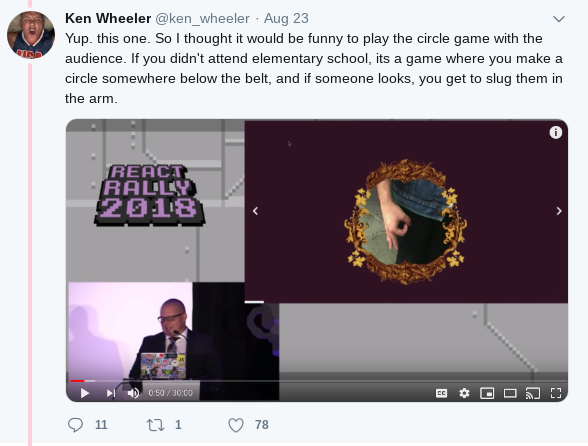 Just pause and reflect for a moment. Someone belongs to a particular culture. In this culture, they find a particular gesture offensive. That someone then expects others to know the significance of the gesture in that particular culture, and takes offence if they don’t. And not only does he take offence, he makes it known to the supposed offender that he is offended. He calls them out, as they like to say.

So, words were said. People got pissed. And eventually Ken snapped, first like this: 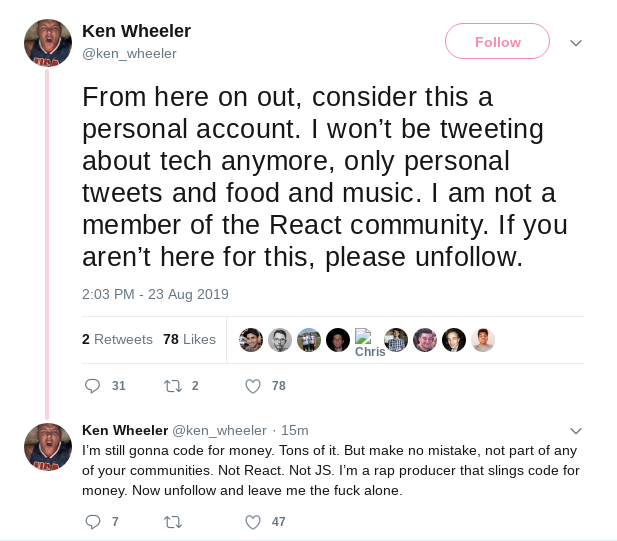 Meanwhile, someone shitposted an infantile tweet comparing the character of React users vs Vue users: 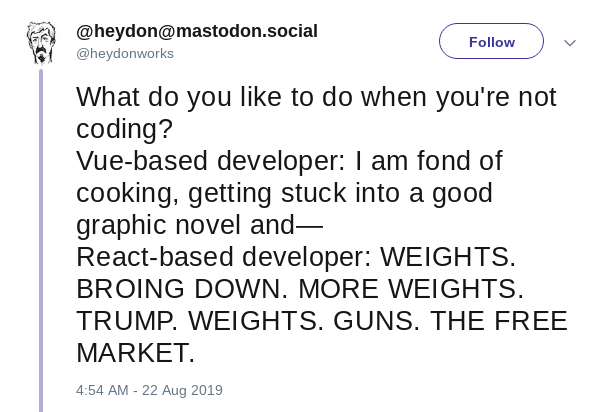 I am appalled by the absurdity of it all. This kind of groupthink, tribalism, sanctimoniousness, and eagerness for public shaming sounds as bad as the stories of Soviet comradely courts or of peer persecution of moral tresspassers in religious societies. I am surprised I am not seeing a more prominent counter-cultural dissident movement rejecting the emerging orthodoxy.

What makes this story particularly ironic is that the javascript community (and, by extension, the React community, being one of its largest chapters), due to its enormity and the low barrier of entry has become one of the most "diverse", "inclusive", "welcoming", and so forth, developer communities out there. And yet it keeps convulsing and running purges within itself.

Standard, a JavaScript style guide, linter, and automatic code fixer, has implemented what appears to be the first advertising system for JavaScript libraries.

Starting with last week, when developers install the library via the npm JavaScript package manager, they also get a giant banner advertisement in their terminal.

The ads are powered by a new project called Funding, authored by one of the Standard devs. The Funding library was included with the Standard 14.0.0 release, published last week, when the ads first started showing up in other people's terminals.

The idea behind Funding is that companies buy ad space in people's terminals, and the Funding project then shares its profits with open-source projects who signed-up to show the ads.

Terminal is the last place where I expected to see ads. It is so sad they finally penetrated this impregnable fortress.
Collapse