In Luzhin's previous game, on his way to the final, the film shows an inaccurate checkmating move. The scene shows White (Luzhin) play an apparently brilliant combination culminating in a queen sacrifice followed by Rd1-d8#. 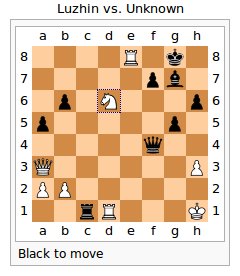 However, White's rook on the d1 square is pinned against its king in the corner at h1 by Black's rook on c1, making the checkmate unplayable.

Nevertheless Luzhin (White) is shown playing the illegal winning move to wild applause from the audience.

The sequence is as follows, Luzhin has just played his rook to e8 (check) although it is not clear if this was a capture or not. Play then continues:

Because the film undoubtedly had chess experts available (or people knowledgeable about chess), and because there were no other errors, it is suspected that this sensational error at the end was artistic licence of the film-makers, perhaps as a marketing ploy or to make the piece more memorable. It is highly likely that the intent was to reproduce the finish of the game Vidmar - Euwe, Karlsbad 1929., where Black Rook was placed on c2 and not on c1.